Lighting designers now have a significant amount of experience with LED technology in public lighting. Deployed for about ten years, LED is still marginally conquering our cities, but it is now the only serious alternative for the renovation of any public lighting park.

Beyond these three advantages, it must be said that LED technology is a digital technology that is breaking into street lighting. This technology has been standardized through a coordinated effort by the industry, which has agreed on digital and mechanical standards. These recent standards have a great impact on the ease of deployment; they also induce a healthier competition between manufacturers and they orientate the price of equipment downwards. This digital evolution is bringing public lighting into a new era allowing for drastic operational improvements (energy, maintenance) which will be a major asset for cities wishing to decarbonize and limit their energy expenses.

From a decarbonation point of view, the possibility of reducing energy consumption by at least 50% through the introduction of LEDs and the very long life of the equipment (100,000 hours), which reduces maintenance costs and pollution, are of particular interest.

However, behind these known advantages, other aspects are hidden. At a time when the problems of energy sobriety are becoming more and more acute, we would like to draw attention to the relatively unknown extensions of a revolution currently underway in public lighting.

Street lighting is one of the only infrastructures that can be decarbonized up to 70% to 80% thanks to the irruption of digitalization and new technologies. This revolution concerns much more than street lighting, it concerns a whole range of services that will be offered by the Industrial Services of tomorrow and for which street lighting management software will play a unifying role.

2. From LED to smart LED

LED-based lighting offers a first solution to decarbonize public lighting by up to 50%. The digital nature of the ballasts that control the power of LED lighting allows us to go much further by adapting the intensity of the lighting according to the context. Through a bidirectional network connection of each luminaire to a server, it is possible to optimize the power of the luminous flux according to the real and instantaneous needs, for example according to the place, the date, the hour, the volume of traffic, the presence of a vehicle or a pedestrian. In order to create connections to a server, the infrastructure of the LED lights is equipped with ad hoc controllers whose function is to create a wireless network of the Internet of Things type that spans all the arteries and the canopy of the city.

This communication network, which weaves its web over the city, makes it possible to give specific orders to each luminaire. These orders can consist of lighting according to power profiles depending on the time of day and the day of the week.

There are two types of solutions. In the first type of solution, which is more suitable for road lighting, the hourly traffic densities are generally known in advance. The power can thus be lowered, at certain times of the night when traffic is very low, for example to 20% of the nominal power. This first type of dimming strategy, based on hourly profiles, generally reduces the average power of LED lighting by 30 to 40%. In cumulative power, this intelligent LED solution can save an average of 70% of energy when replacing the latest sodium lighting solutions.

In a second type of solution, more suitable for residential areas, a dynamic dimming strategy is used. Here, by default, the lighting is very low, around 10% of the nominal power. The controllers are equipped with motion detectors, which allow to control an increase of the light power according to the entry of a pedestrian or a vehicle in the detection field. The existence of a communication network above the canopy makes it possible to alert neighboring luminaires to create light paths that provide safe pedestrian guidance. In most of the cities where we have deployed this strategy, smart LEDs are delivering significant energy savings of up to 80%.

Finally, there is a hybrid strategy to these two solutions, sometimes called volumetric dimming, which consists of deploying traffic counters on portions of the road. It is then possible to lower the lighting, without any previous knowledge of the traffic, but according to algorithms of adaptation to the average recent traffic.

The fine tuning of the light output thanks to intelligent LED lighting allows a decarbonization of between 70 and 80% of the traditional lighting based on sodium discharge lamps. For older parts of the infrastructure that still contain mercury lamps, the replacement of these lamps brings even more spectacular savings.

2.2 The operational efficiency of the smart LED

In addition to these very significant savings, the possibility of knowing the status of the infrastructure, controllers and ballasts in real time provides an accurate record and notification of failures. This known and permanent state of the infrastructure and inventory offers lighting engineers unprecedented possibilities for rationalizing maintenance. Many operations that used to require the use of bucket trucks and the requisition of a driver and a lighting technician are reduced to a few mouse clicks on an application interface with the mapping of the public lighting network. Thus, in addition to the longevity of LED luminaires that do not require replacement for 15 to 20 years and therefore require far fewer replacements than the old discharge lamps, there are very significant operational maintenance gains.

Intelligent LEDs can therefore offer two things: energy savings of around 70% and operational savings that are a little more difficult to calculate, as they depend on the content of previous maintenance contracts. In practice, it is not uncommon to expect maintenance savings of 20 to 50%.

While many projects in Switzerland, just two years ago, were content to deploy simple LED technology because of its ease of installation, the question of whether or not to deploy intelligent LEDs is no longer an issue today. In view of the additional energy savings brought by smart LED, in view of the maintenance savings and the additional services brought by the software, smart LED is now essential.

Street lighting infrastructures are evolving as more and more IT, networks and the Internet of Things are entering a world where previously controls triggered by clocks and twilight probes were used to illuminate entire segments of luminaires in an undifferentiated, all-or-nothing manner. Today, each luminaire can be treated in a differentiated way so that it lights up just right, where and when it is needed. Similarly, each luminaire now informs a server about its energy consumption and any possible failures. This major evolution challenges lighting designers to integrate computer know-how into their practice.

This IT know-how will now help them in the management of their lighting equipment, not only by allowing them to adjust the illumination in the most accurate and parsimonious way, but also by rationalizing maintenance costs. Finally, the software allows for fine, ubiquitous and real-time knowledge of the energy performance of the installed infrastructure. This will be very important for industrial services or energy specialists who will have to report to cities on the efficiency of the new solutions implemented.

This dependence on infrastructure management via high-performance software that provides services to each of the street lighting businesses will increase if we imagine that energy performance contracts (EPCs) will be the alpha and omega for the rapid implementation of new infrastructure. If it is clear to cities that low-carbon street lighting transformation through performance-based infrastructure financing is feasible, then decisions will be made much faster. Optimizing the performance of each stakeholder will be important, and it is the software and digitization of lighting processes that will facilitate this. On this condition, a massive market and a massive decarbonization of street lighting can be created.

4. The move towards connected industrial services

Behind this rise in the power of software in public lighting networks are other very important strategic aspects. The street lighting industry was among the first to anticipate the needs of smart cities. Because street lighting was quickly identified as one of the first smart city applications to save energy, lighting manufacturers were the first to agree on interoperability standards for the connection of smart city objects other than street lighting equipment. Thus, the TALQ consortium, founded in 2012 initially by smart outdoor lighting suppliers, has become an open industry consortium dealing with the entire smart city environment. The TALQ consortium has defined a globally accepted interface standard for smart city device networks. This extension of smart street lighting software to smart city management software is becoming a reality. It significantly increases the interest for cities to deploy smart LED networks and to acquire or use smart city oriented smart lighting management software. 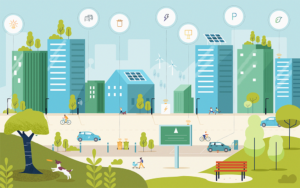 The drastic increase in energy prices and the need to control energy dependency for climatic and geopolitical reasons are now radically changing the economic landscape. Some pioneering industrial utilities are beginning to offer street lighting infrastructure financing through energy performance. Lease financing of public lighting infrastructure is becoming very attractive for cities that will be able to reform their old lighting stock without straining their operating budget. These new financing facilities will position industrial services as service providers for the smart cities of tomorrow. Thus, intelligent street lighting software will play a major strategic role in the services provided to cities, which will be able to modernize many of the services provided to their citizens. This software will in fact become fundamental tools for new intelligent and connected industrial services.